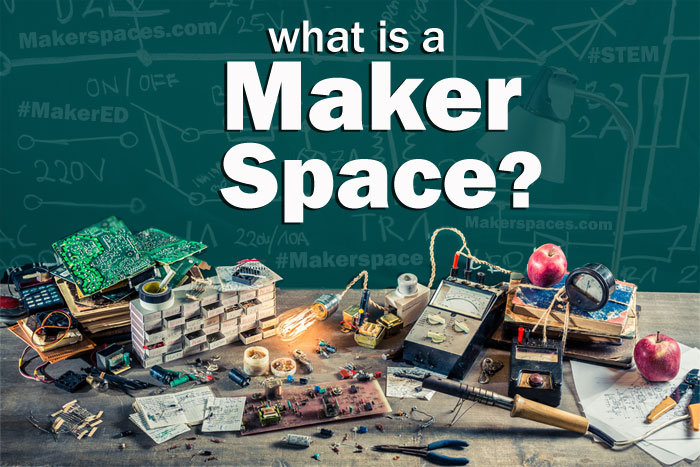 What is a makerspace?

A makerspace is a collaborative work space inside a school, library or separate public/private facility for making, learning, exploring and sharing that uses high tech to no tech tools.  These spaces are open to kids, adults, and entrepreneurs and have a variety of maker equipment including 3D printers, laser cutters, cnc machines, soldering irons and even sewing machines.  A makerspace however doesn’t need to include all of these machines or even any of them to be considered a makerspace.  If you have cardboard, legos and art supplies you’re in business. If you are interested in finding out more about laser cutters though, you could always take a look at someone like Boss Laser. They can provide different types of laser from home use to industrial ones. It might be worthwhile having a look at if you want to make your own makerspace at home as well. It’s more of the maker mindset of creating something out of nothing and exploring your own interests that’s at the core of a makerspace.  These spaces are also helping to prepare those who need the critical 21st century skills in the fields of science, technology, engineering and math (STEM).  They provide hands on learning, help with critical thinking skills and even boost self-confidence.  Some of the skills that are learned in a makerspace pertain to electronics, 3d printing, 3D modeling, coding, robotics and even woodworking,   Makerspaces are also fostering entrepreneurship and are being utilized as incubators and accelerators for business startups.  There have already been some amazing success stories that have come out of makerspaces to date.

Now that you have the birdseye view of a makerspace, lets dig a little deeper.

Makerspaces have been called everything from a FabLab to a Techshop to a hackerspace.   Is there a difference between these names?  Yes and no.  At the core, they are all places for making, collaborating, learning and sharing.  Although these spaces have a lot in common, they are also different in a few ways.

To start with, a FabLab and Techshop are trademarked names for a particular type of makerspace.  They are both generally stocked with similar types of maker equipment like 3D printers, laser cutters, CNC machines, hand tools etc.  One is governed by a corporation (Techshop) and the other a foundation (Fab Foundation) and each have their own specific rules and charters to follow.

Techshop  is a chain of for-profit makerspaces that was started in 2006 in CA.  They bill themself as part prototyping and fabrication studio and part learning center.  Their makerspaces are supported by monthly fees from the maker/members who join.

Fab Labs were started by MIT Professor Neil Gershenfeld at the Center for Bits and Atoms in MITs Media Lab.  A FabLab is a small-scale workshop offering digital fabrication.  They define a FabLab in their own words as “a technical prototyping platform for innovation and invention, providing stimulus for local entrepreneurship.  It is also a platform for learning and innovation: a place to play, to create, to learn, to mentor, to invent.”

What is the difference between a hackerspace and a makerspace?

In order to understand the differences between a hackerspace and a makerspace, we need to do a short history lesson.   The beginning of hackerspaces can be traced back to 1995 Berlin when the world’s first hackerspace called C-Base was launched.  The concept of a hackerspace started as places in the community where a group of computer programmers could collectively meet, work, and share infrastructure.  They would “hack” technology and try to make it do something it wasn’t meant to do.  This term of “hacking” or “hacker” in the computer sense soon progressed and expanded into the hacking of physical objects as we know it today.  Over the years, the price of maker tools such as 3D printers, desktop laser cutters and CNC routers became more affordable and hackerspaces naturally evolved into makerspaces.  Wikipedia defines a hackerspace “as a community-operated workspace where people with common interests, often in computers, technology, science and digital art can meet, socialize and collaborate.”   Those are also the same characteristics you will find in a makerspace.  Its hard to find many differences anymore between the two terms and I believe at this point its just a matter of preference which name you choose or associate with.  The problem with the term hackerspace is the unfortunate negative image people have of a hacker.  It may be completely fine to name your private business incubator a “hackerspace” but I dont believe many schools or libraries will be going that route and will continue to use the term makerspace, maker lab etc.

Every makerspace is unique and the projects that are worked on inside of them are also very diverse.  Here are just some of the things you can do in a makerspace :

Laura Fleming –   “A makerspace is a metaphor for a unique learning environment that encourages tinkering, play and open-ended exploration for all.”

Diana Rendina –  “A makerspace is a place where students can gather to create, invent, tinker, explore and discover using a variety of tools and materials.”

John J Burke –  “A makerspace is an area in a library where users can use tools and equipment to design, build, and create all sorts of different things.  It may be a dedicated room or a multipurpose space in which a collection of raw materials and resources can be utilized as desired. Projects range from prototyping product designs with 3D printers, to programming robots, to creating art out of recycled items.”

Ann Smart – “A space with materials for students to let their curiosity and imagination come to life.   An informal, playful, atmosphere for learning to unfold.   A space where making, rather than consuming is the focus.   A space where trans-disciplinary learning, inquiry, risk-taking, thinking, crafting, tinkering, and wondering can blossom.”

TheRSA.org –  “Makerspaces are open access workshops hosting a variety of new and old tools – from 3D printers and laser cutters to sewing machines and soldering irons.  Makerspaces are more than just sites to craft objects. They are also places to experiment with a different way of living – one that responds to the challenges and opportunities of a world in which technology is ubiquitous.”

i3Detroit.com –  A Makerspace is  “a collision of art, technology, learning, and collaboration”

Mad-Learn.com –  “A makerspace is a place that provides creative time and space for people of all ages to build prototypes, explore questions, fail and retry, bounce ideas off one another and build something together. These spaces don’t always include technology, since some prototypes and designs can be built out of anything or may include various stages of design that move from analog to digital and back again, but many do include technology. Now, with 3D printing and design, makerspaces are really taking off.  Kids gather in a common area to design and ideate on 3D printing projects.   The makerspace becomes a safe area where creativity and risk-taking becomes common practice.”

Techtarget.com – “A makerspace is a community center that provides technology, manufacturing equipment and educational opportunities to the public.  Makerspaces allow community members to design, prototype and manufacture items using tools that would otherwise be inaccessible or affordable such as 3-D printers, digital fabrication machines and computer-aided design (CAD) software.  Makerspaces are typically funded by membership fees or through affiliations with external organizations, such as universities, for-profit companies, non-profit organizations and libraries.  The free exchange of ideas and resources is a central tenet of makerspaces.  Often, members of different makerspaces will collaborate on projects and share knowledge at gatherings known as build nights or open-house days.”

Bozeman Makerspace –  “A Makerspace / Hackerspace allows groups of people to pool resources and create a community of people with varied interests. These interests may include but are definitely not limited to: circuitry, robotics, soldering, woodworking, fabricating, programming, networking, hacking, bending, etc.”

Room 6KGH.com –  “A makerspace is simply a place where people gather and make.  They come all shape and size.  A makerspace is a student centered learning environment with limitless possibilities.”

Educause.edu – “Makerspaces are zones of self-directed learning. Their hands-on character, coupled with the tools and raw materials that support invention, provide the ultimate workshop for the tinkerer and the perfect educational space for individuals who learn best by doing…they promote multidisciplinary thinking and learning, enriching the projects that are built there and the value of the makerspace as an educational venue.”

Wikipedia defines a makerspace “as a community-operated workspace where people with common interests, often in computers, machining, technology, science, digital art or electronic art, can meet, socialize and collaborate.  Additionally, Wikipedia has a secondary listing for Library Maker Space which they define as “an area traditionally found in public libraries that offers patrons an opportunity to create content through various resources such as computers, 3-D printers, audio and visual devices, and traditional arts and crafts materials, including ecologic material.   In the field of library science, maker spaces are classified as a type of library service offered by librarians to patrons.”

Libraries & Maker Culture –  “Makerspaces which are sometimes called hackerspaces–can be any area where people gather to make and create. These spaces often include 3D printers, but do not necessarily have to.  In makerspaces, people share supplies, skills, and ideas, and often work together on projects.  Makerspaces grew out of maker culture–a group of people dedicated to craftsmanship and creation. Makerism focuses on DIY projects, and makers value creation by individuals or small groups rather than bulk production. In general, makerism is also a culture of creation over consumption.”

Library as Incubator – “Makerspaces are collaborative learning environments where people come together to share materials and learn new skills.  Makerspaces are not necessarily born out of a specific set of materials or spaces, but rather a mindset of community partnership, collaboration, and creation. ”

OEDB.org –  Makerspaces, sometimes also referred to as hackerspaces, hackspaces, and fablabs are creative, DIY spaces where people can gather to create, invent, and learn. In libraries they often have 3D printers, software, electronics, craft and hardware supplies and tools, and more.